A Life in Motion: Julie Newmar 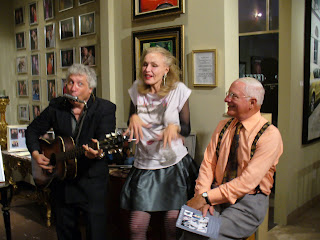 A fabulous actress and wonderful writer (someone I have been blessed to work with as an editor) had a gallery opening today: the amazing Julie Newmar (aka Catwoman). The show at the David Streets Gallery (9407 and 9411 S. Santa Monica Blvd., Beverly Hills) features selected photographs from her career. Wow! Julie is so animated in her photographs, and I got to see her produce the same wonderful energy and variety of poses for an impromptu photo session that occurred near the end of the reception.
Being the purr-fect model, Julie has posed for some of the biggest names in photography: (Bruno) Bernard of Hollywood, Bert Stern, John Engstead, Peter Basch, and others. The David Streets exhibit includes shots of Julie from the beginning of her career up to the present day.

A companion show at the Paley Center for Media (465 North Beverly Drive) will remain on view until December 6th.

Rumors Are that Apple May Acquire www.Twitter.com

Since I joined Twitter a few weeks ago [www.twitter.com/RobinQuinninLA], I've found it to be a great way to network, meet new folks with similar interests, and share knowledge.

Rumors are that Apple may pay cash ($700 million) to acquire Twitter. This social networking service, which features mini-blogs, reportedly has 25 million Tweeters.

Celebrities, such as Britney Spears, are using the service to stay in touch with fans. Business people are signing up to network within their fields.

I've been sending tweets to inspire book people and inform them of publishing news and writing tips.

Learn more about the rumors at:
http://www.appleinsider.com/articles/09/05/05/rumors_surface_of_apple_showing_interest_in_acquiring_twitter.html
Posted by Robin at 9:04 AM No comments:

Learn how to work the major book events coming up in LA and NYC. Come to this Wednesday's Book Publicists of Southern California (BPSC) meeting where we'll be talking about the LA Times Festival of Books and Book Expo America (BEA).

Publicist Flo Selfman will be discussing this weekend's LA Times Book Fair. Then I'll be offering tips on BEA (May 29-May 31) -- how to benefit from it, whether or not you go! I've been to BEA over 10 times, so I can tell you what to avoid and what to do right.

The Book Publicists meetings are a great place to network and learn. Enjoy a buffet dinner and meet new people from the book biz before the program.

More info at www.bookpublicists.org.
Posted by Robin at 12:18 PM No comments:

Time to Craft Your Elevator Pitch

Learn more about working an event at my talk in Los Angeles April 22.

Right now, many book folks are getting ready for the LA Times Book Festival at UCLA (April 25-26) as well as Book Expo America in NYC (May 29-31). Therefore this is the perfect time of year to work on your elevator speech.

An elevator speech is a quick take on what you, your book, your publishing company or your service is all about. The basic idea is to pitch it as if you only had 30 seconds with a key person as they share an elevator ride with you. As you travel between floors, you can only use less than 150 words (time yourself!).

What do you want to cover? First, what is it that you’re pitching? Second, why should this person care (what problem will it solve? how will it help them?). Third, why should they choose you over others (brief sketch of your experience and past successes).

If you get ready now, you have over a week to practice before you hit the ground running at UCLA. Have fun! And come by the Book Publicists of Southern Calfiornia Booth and say hi! (I will be there on Sunday from 3:00 to 4:00 PM).

Also, I will be giving a talk on how to work Book Expo America at the Book Publicists of Southern California meeting next Wednesday (April 22). The first speaker will cover how to network at the UCLA Book Fair. Visit http://www.bookpublicists.org/pages/events.asp to learn more.
Posted by Robin at 8:52 AM No comments:

I signed up recently for Twitter, after visiting the tweets for a couple clients (www.twitter.com/DanPoynter) and (http://twitter.com/SoulFullEating).

Right now, I am posting inspirational quotes on my Twitter page.

Come visit me there, and see what the tweeting is all about! Become a follower of mine and be inspired!

Yesterday I headed out to attend a panel discussion on “Los Angeles as Literature” at Santa Monica’s beautifully designed modern main library. I was particularly interested in this panel because I have always fallen in love with places. Also, when we write, our setting is so important for flavoring what we get down on the page. After soaking up some sun for a precious five minutes in the library’s courtyard, I wandered inside to meet a fellow writer at the MLK Jr. Auditorium entrance.

David L. Ulin, The Los Angeles Times Book Editor, served as the discussion’s adept moderator. The authors were a fittingly diverse trio. Cecil Castellucci is a young adult writer and the author of Beige. Nina Revoyr is a Japanese-American novelist (The Age of Dreaming). Gary Phillips is the Black writer/creator of the Ivan Monk mystery series (Bangers).

The panelists addressed the author’s job of breaking through the stereotypes of a place to find its real identity. Typical depictions of Los Angeles they identified included the world of Hollywood and an urban gangland. Nina Revoyr pointed out that beyond the stereotypes are so many untold stories. Gary Phillips shared that he was inspired to write about our city because the Los Angeles described in the many mysteries set here was not the place he knew.

Nina noted that one way stereotypes get established is that writers use “shorthand” to tell about a place. One of the favorite LA neighborhoods she has written about is Crenshaw, and this writer wanted to bring out its racial diversity as it is often thought of as a Black neighborhood. The panelists also brought out another reason a place get inaccurately depicted; that is when outsiders take a quick take on a newsstory, and are influenced by the misinformed ideas of the place that they bring with them.

Cecil talked about how her home neighborhood of Silverlake influences her writing, with its spirit as a creative space. This line of thought was reflected in a comment by Gary that a writer must immerse him- or herself in a place and among its people to get an accurate picture. It is not enough to just read about it.

The speakers, including David Ulin, explored LA’s real identity. They noted that since Los Angeles is constantly evolving (like many other places), we must make it a point to re-learn our city if we are to write accurately about it. One aspect that brings about change here is the steady influx of outsiders streaming in to LA. Nina pointed out that this is a young city, still finding its identity. David mentioned how LA finds itself always compared with New York and San Francisco (it seems these comparisons can make us defensive at times as Angelenos). Perhaps our strength is an identity that was spoken of by Nina (which I believe is often true), that this is a place where things happen first… a trend-setting city.

I was left with the impression of a place that is like a mosaic. So many slices of life that themselves have smaller parts and stories within. I was reminded of my early days in Los Angeles when I traveled all over the city to write pieces for the Los Angeles Reader. This served as a good foundation, and enriched me. I want to make a point of continuing to move through many sections of LA. A note of hope for our city that came out of the panel is that a more expansive mass transit system here may make us less neighborhood-centric and more open to the many diverse neighborhoods and people who make up our great city.